Understanding the scale of online alternative finance in China [Report]

With the publication of the first Asia-Pacific Alternative Finance Benchmarking Report, we can benchmark the scale of online alternative finance in China.

Alternative finance in this report is defined as online alternative financing channels and instruments outside of traditional banking. These channels are predominately marketplace / P2P lending, but also balance sheet lending, invoice trading and reward-based, donation-based and equity-based crowdfunding. To enable international comparison, we did not include online money market funds, third-party payments providers or digital currencies.

According to our survey data in this report, the total size of online alternative fundraising in China reached $101.7 billion US dollars in 2015, (or RMB 639 billion), almost 99 times the volume of alternative financing volume across the rest of the Asia-Pacific area.* Because of China’s huge population, absolute numbers in China are often large. But what the Benchmarking report allows us to do for the first time is look at relative measures. For instance, we found that the growth of online alternative finance in China has also been extremely rapid—at well over 300% year-on-year between 2013 to 2015.

Alternative finance in China: an outlier in the Asia-Pacific

Yet one chart in the report has attracted more attention in China than any other. The chart below, which plots the volume of alternative fundraising per capita against GDP per capita across countries in the Asia-Pacific. 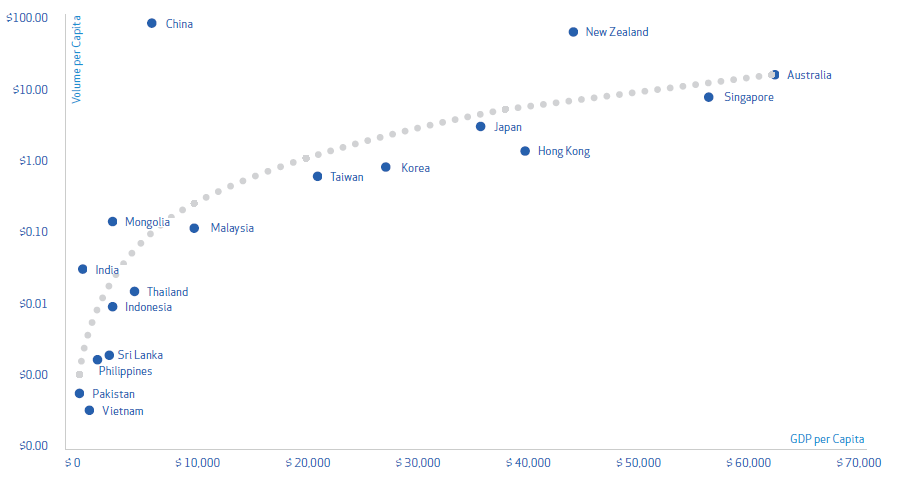 Alternative finance in China has the highest volume of online fundraising per capita of any country in the Asia-Pacific, with almost $75 per person was raised per person in 2015.

The next highest online alternative financing volume on a per capita basis was New Zealand with over $59 per person, followed by Australia with about $14 per person.

But the chart also shows that China’s alternative financing volume is also exceptional against another benchmark—GDP per capita.

Across most Asia-Pacific countries, there is a strong positive relationship between the level of GDP per capita and the scale of alternative financing volume. One reason why this might be the case because the higher the level of per capita GDP, the more people there are who have the capacity to invest, including in alternative assets.

The widely cited World Bank report on Crowdfunding's Potential for the Developing World, for instance, takes $10,000 USD per person a year as proxy for the lower bound of disposable income levels in developing countries above which people tend to accumulate savings and assets.

Yet alternative finance in China seems like an exception to other countries in the Asia-Pacific area because it has such a high level of fundraising at a relatively low level of GDP per capita.

My interpretation is firstly that China’s aggregate GDP per capita figures hide more than they reveal about relative income levels within China.

Beyond income levels, the unique financial environment also plays a major role in explaining its high levels of alternative financing in China. There are both macro and institutional drivers at work here.

The macro story has to do with China’s low official interest rate environment which makes the promise of alternative investment returns attractive. Whereas official bank deposit rates are around three percent a year at nominal rates, many marketplace / P2P providers offer expected returns of three to four times the bank rate.

According to our study, alternative lending by marketplace / P2P lending providers accounted for 25 times the funding of all other alternative finance providers.

Moreover the scale of potential retail investor money in China is huge--according to the National Bureau of Statistics, total Chinese household deposits at the end of 2015 was equivalent to $8.8 trillion US dollars.

For any one with spare cash, short term lending through marketplace / P2P providers in China offers the prospect of a steady return which retail investors are not getting through the banks or other channels.

But there is also high demand for business and personal borrowing which remains unmet by the traditional state-owned bank system. Although China’s banks have been lending more to non-state owned enterprises then at any time in the recent past, small and micro-enterprise borrowers encounter a large funding gap.

Bank penetration in China, measured by the share of the population with bank accounts, is also lower than in the developed economies. The banks have also been very slow to respond to the growth of more diverse personal and household financing wants and needs.

Alternative finance in China, especially marketplace / P2P lending, has emerged as a new asset class for retail investors and as a more flexible source of funding for personal and small enterprise borrowers.

While the value of marketplace / P2P lending in China is still relatively small compared to bank lending, it is much higher than in most other countries.

Consumer lending by registered banks in China in 2015 was about $3 trillion USD--57 times greater than the $52.4 billion in volume of marketplace / P2P consumer lending in China.

Yet a more comparable measure is the value of short-term consumer loans made by banks, which was $652 billion in 2015—12 times the value of the reported volume of marketplace / P2P consumer lending.

While the existing bank-system explains the institutional funding gap, it is the emergence of innovative internet and mobile technology platforms with huge market scale—especially Alibaba/Alipay, Tencent and Baidu--which are enabling the funding gap to be filled.

Alipay for instance, the online payments arm of the e-commerce giant Alibaba accounts for 80 percent of all online private payments, while the internet technology company Tencent now has more than 600 million monthly active users on the social app Wechat, which can now be used to make payments, to transfer cash to peers or to invest online. Across Alipay and Wechat there 357 million mobile payments users in 2015.

As the scale of these platforms has grown, so the scope of their businesses has expanded, including moves into online finance.

Some 65% of the platforms in our report survey had either a major or minor institutional owner and the largest share of these were e-commerce platforms, which have moved to online lending, crowdfunding and asset management.

But it is not only the major platforms--they have also provided the online infrastructure for thousands of other online alternative finance providers to enter the market.

The official rationale for this approach has been to allow and even to promote the growth of market-based funding as a means to diversify financing channels, despite the risks of platform failure and even of outright fraud of which there are many cases.

This unique financial environment explains the huge growth in the scale of online alternative finance in China relative to other markets.

* The Asia-Pacific area surveyed in this report does not include the America’s.