The first rise and fall of Bitcoin in China

While the bears came out on China's stock and currency markets in 2015, the period has also seen renewed interest in Bitcoin in China as an alternative currency and speculative asset.

Much like the impact of shifts in demand in China on global markets, shifts in the volume and direction of Bitcoin trading in China has been driving the global price of Bitcoin.

So what is driving the renewed demand for Bitcoin in China? 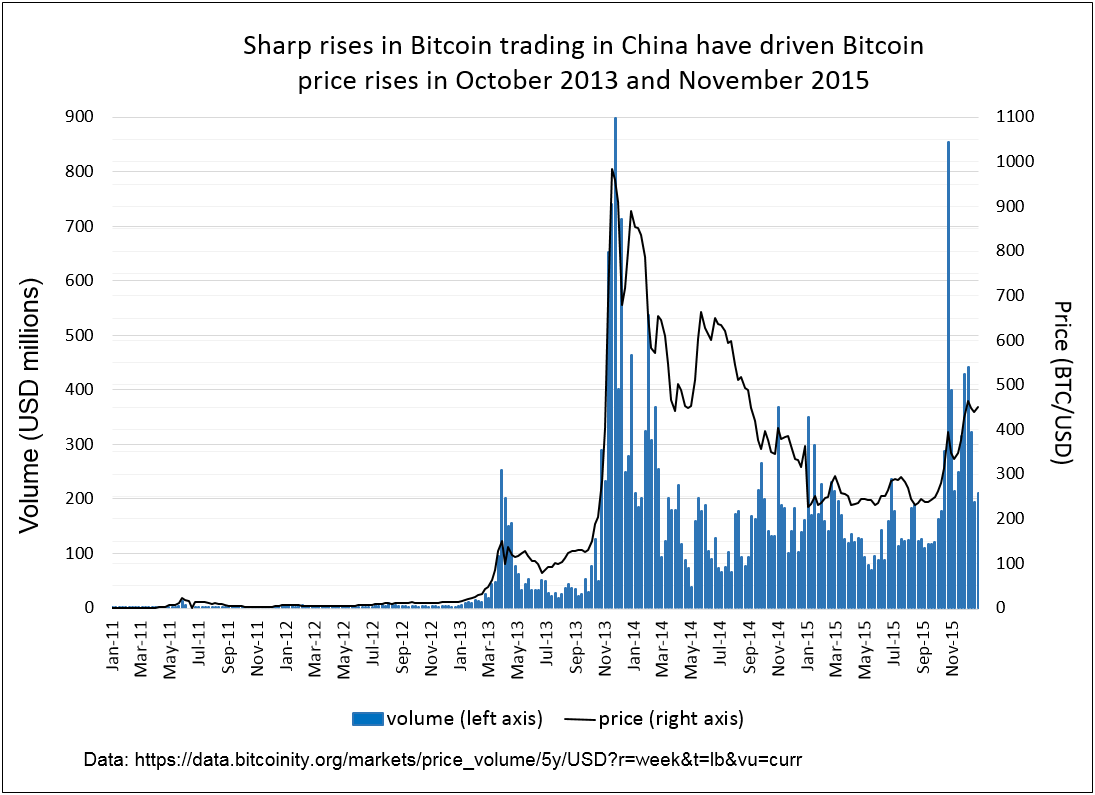 Apart from the volatility on China's A-Share market, some outside observers claim that depreciation pressure on the Chinese currency, the Yuan, is driving the renewed interest in Bitcoin in China.

Zero Hedge, for instance, has also claimed that Chinese users are using Bitcoin to evade China's capital controls and to move cash out of the country—a question to which we will return.

But first, some background on Bitcoin.

Bitcoin is a digital currency--a form of digital cash--which enables individuals and businesses to make direct peer-to-peer payments without using banks or other financial intermediaries. Bitcoin is therefore a channel for financial disintermediation.

Bitcoin is also an alternative currency and a speculative asset. Whereas the major world currencies, like the US dollar or the Chinese Yuan, are government-backed fiat currencies, Bitcoin derives its ‘authority’ from an encrypted public ledger system called the blockchain.

The Bitcoin protocol was first outlined in a pseudonymous paper by Satoshi Nakamoto in November 2008 and the first version of the Bitcoin software client was released via a crypto mailing list in 2009.

Bitcoin transactions are recorded on an encrypted public ledger system and verified through a process called mining. Bitcoin mining is the process by which distributed computer nodes compete to solve the encryption problem on the Bitcoin key-chain system. Bitcoin users have public and private keys (payments addresses), and the encryption process is used to match or resolve these keys.

As each transaction is verified it is recorded in the public ledger system as proof of payment, and this proof of payment or settlement is publicly available and accepted in the length of time it takes to solve the first computer node to solve encryption problem - currently about 10 minutes. In contrast, traditional bank payments take anything from 1 business day to settle local payments to 4-5 days to settle international payments.

Bitcoin therefore radically reduces the costs of making cross-currency and cross-border payments and one of the early Bitcoin applications is as a vehicle for migrant workers to make international remittance payments.

Bitcoin-based payments use in developing countries is growing rapidly, especially Latin and South American countries and across Africa, and for good reason.

Today using Bitcoin a Mexican worker earning US dollars in the United States could deposit Bitcoin to their electronic Bitcoin wallet, which is linked to a payments card held by a relative in Mexico, who could then use the card to make payments at the local supermarket chain.

Compared to international bank transfers, or Western Union, all of this could be done in real time at a cost of one per cent or less using current Bitcoin based applications.

And because users can make peer-to-peer transactions anywhere in the world without the need for banks or traditional payments companies, Bitcoin can bypass capital controls.

While the current global value of Bitcoin is small—an equivalent of $6.3 billion USD on January 1, 2015--over US $50 billion was invested in Bitcoin-based technology applications in 2015.

Bitcoin in China, the first rise and fall

Bitcoin in China got off to a slow start. This changed in May 2013, when China's national CCTV television station aired a highly favourable documentary on Bitcoin.

The result was a flood of Chinese retail investor money into Bitcoin.

Downloads of Bitcoin clients in China for desktop computers, which allow users to buy and sell Bitcoins, surpassed downloads in all other countries.

In October 2013, Bitcoin was even briefly accepted as a means of payment by merchants on China’s e-commerce giant Taobao.com and by Baidui’s Jiasule software security company.

Bictoin mining also took hold in China as as people downloaded the open source Bitcoin mining software in the hope of turning some new coins into a rapidly increasing asset prices.

Yet, as Zennon Kapron explains in his book Bitcoin’s explosive growth in China also triggered its downfall.

China’s authorities' responded to this flood of cash into Bitcoin--which was not under government or centralised company control—by cracking down.

Not only retail investors, but also Bitcoin miners sold out of Bitcoin as quickly as they could and Bitcoin’s global price fell more than 50 per cent, led by the sell-off in China.

The next update to this Bitcoin post will look at the second coming of Bitcoin in China, and its premature time out.

For two great primers on the early days of Bitcoin in China, you can read:

1. Chomping at the Bit: The Past, Present and Future of Bitcoin in China, 2014, by Zennon Kapron

There are many Bitcoin Wallets available for storing, accepting and making Bitcoin payments--including here.